Why Competitive Chess is So Good For Kids 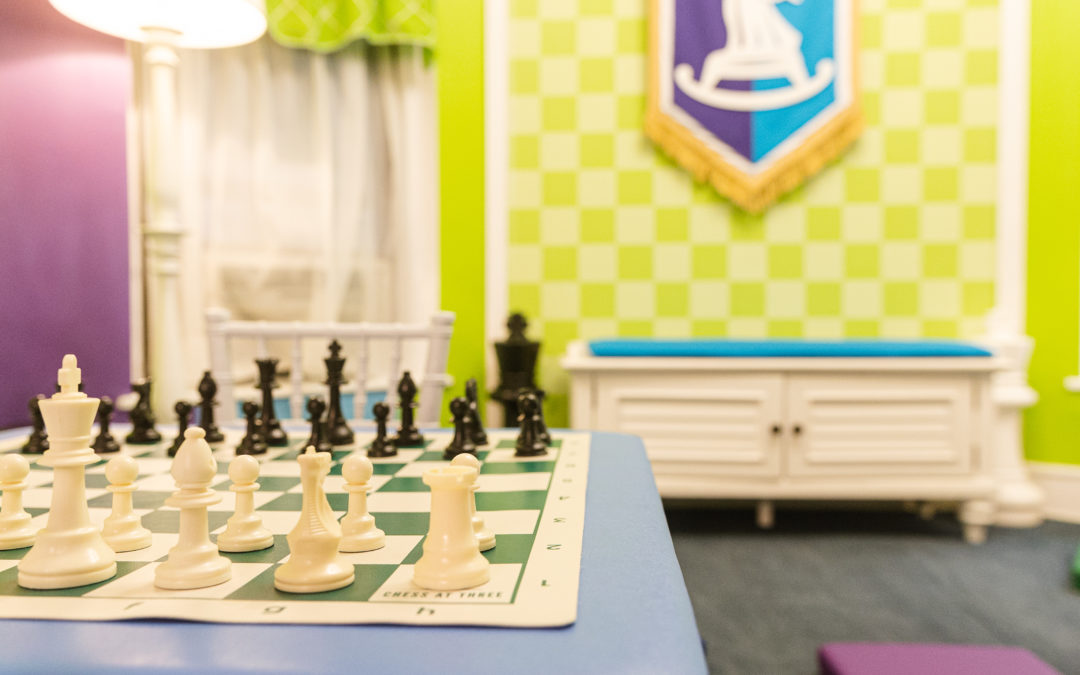 In many ways, the sixty-four squares of the chessboard represent the ultimate safe space. All are welcome within them regardless of the language they speak, the country they hail from, or even how long they’ve been playing the game. 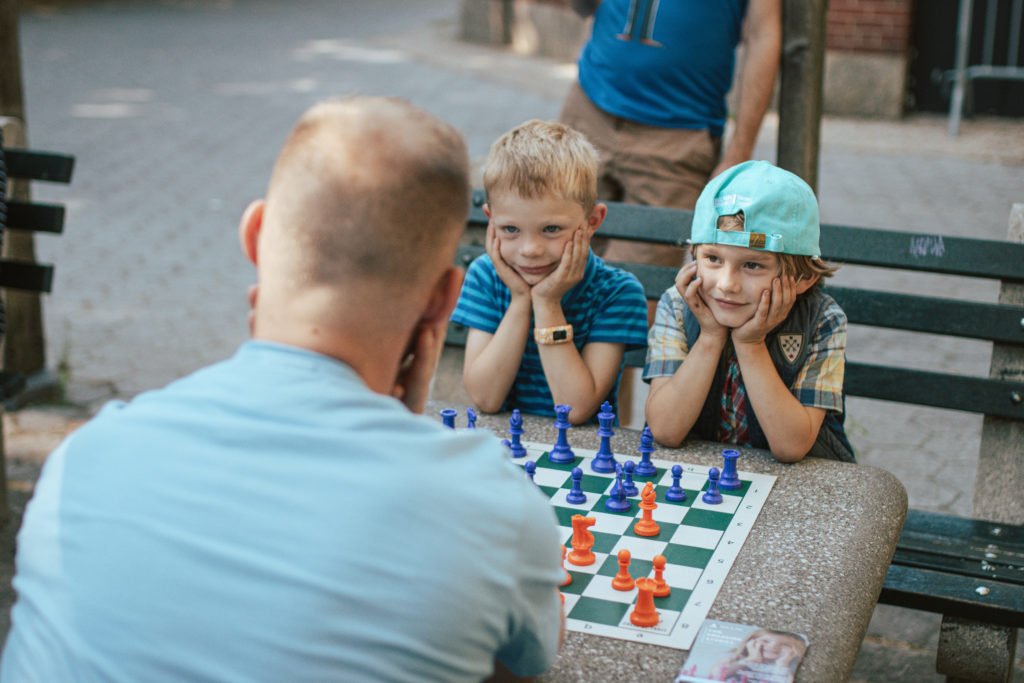 The above is worth mentioning because those same sixty-four squares also represent one of the most hotly contested playing fields in the world, and this week’s blog is all about playing chess competitively.

Perhaps the most important life lesson that Chess at Three tutors instill in their students is a healthy relationship with competition. That’s why, over the past year, one of our most popular offerings has been an online and in-person tournament series called Quads.

A supplement to your child’s regular chess lessons, Quads is a fun, focused chess tournament in which kids play several games of chess against other kids of their age and skill level. Expert tutors called Quad Captains oversee each tournament, refereeing games and ensuring that everyone plays respectfully and has fun.

But playing competitive chess is more than just a fun challenge. It can also have a profound impact on your child’s social and academic development. Here are some of the ways that participating in Quads tournaments can benefit your child.

Simply put, playing real-life opponents at or above your skill level makes you better at chess. Not to besmirch the incredible value of playing at home, casually with friends, or in a tutored lesson, but each of those contexts lacks the competitive intensity of a tournament setting. 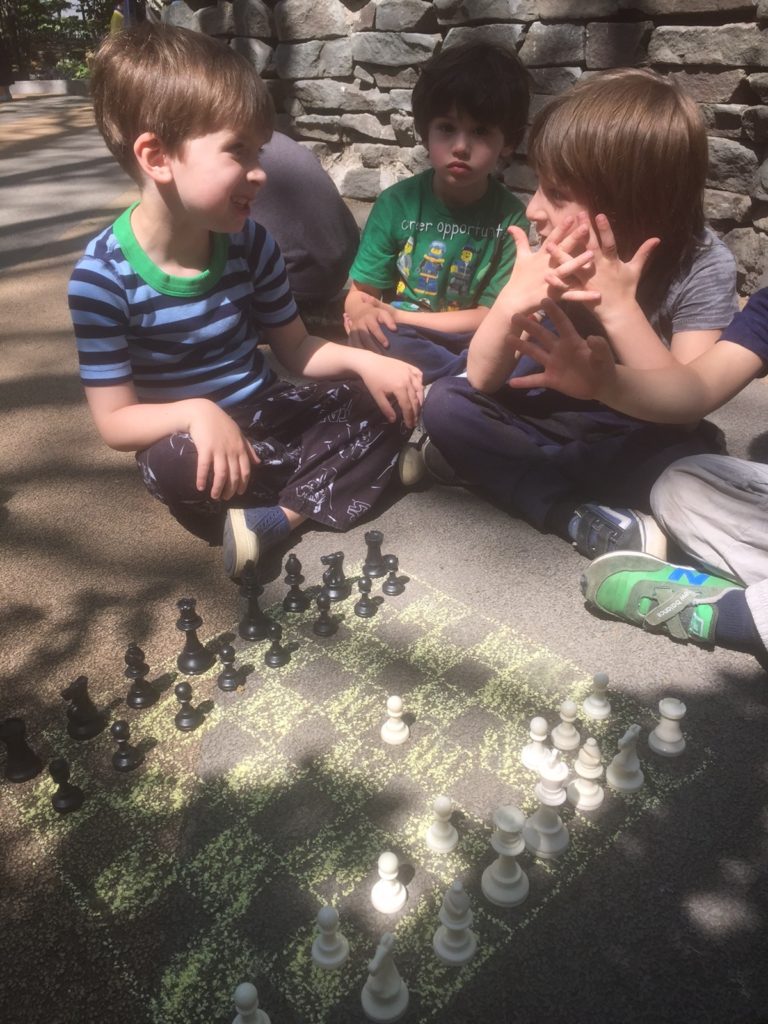 Moreover, going toe to toe with a player your child doesn’t know personally (with no chance of a mid-game “take back”) sharpens their chess acumen along with a range of vital academic skills. The research bears this out, as we mentioned in a blog last year.

A longitudinal study conducted at Aspen Elementary School in New Mexico from 2007 to 2014 showed that kids who took chess lessons and played in competitive tournaments outside of school outperformed their “non-chess” classmates by a whopping 3​​0%–50% on math tests and 10%–20% on reading and verbal tests. Now that’s a competitive advantage!

Another way in which tournament play differs from casual chess is the element of time control. At the start of each game, each player is given the same amount of time which they can use however they like, but if they run out of time before their opponent, they forfeit the game.

Quads celebrates this tradition by giving each child ten minutes at the outset of a game. Quads tournaments are offered both online, where the timers start automatically after each move, and in-person, where kids get the satisfaction of punching a real-deal chess clock themselves! 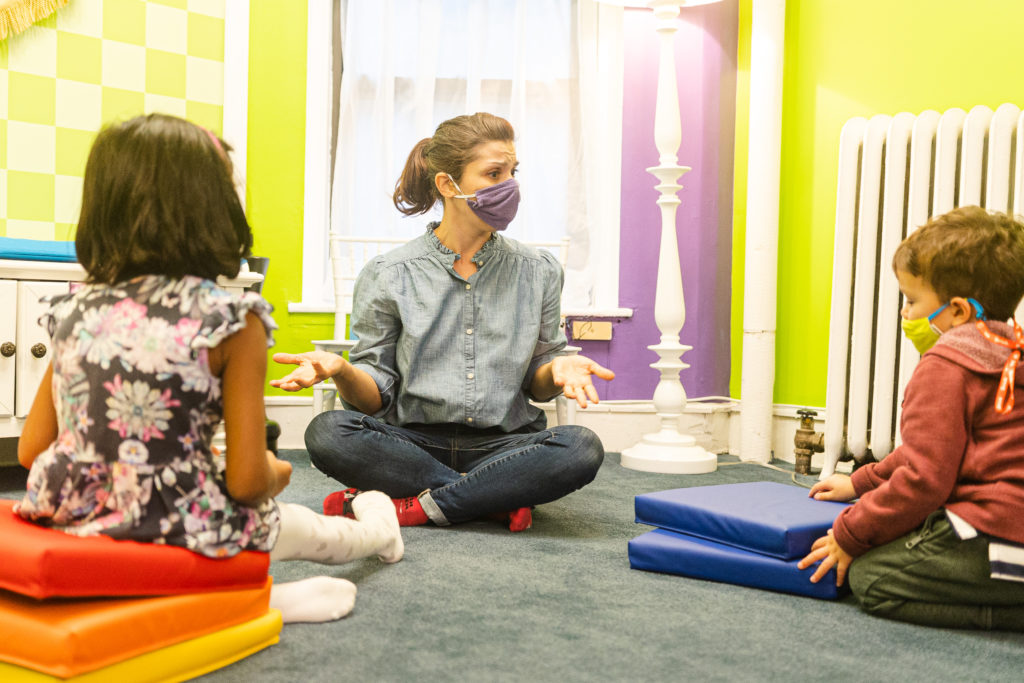 Tournament chess players are usually required to record all the moves made in their games, both their own and their opponent’s. Chess at Three students learn how to do this the same way the pros do (through a system called algebraic notation) by about their 35th chess lesson.

Recording a game in algebraic notation makes it possible to replay and analyze that game after the fact, which helps students improve their planning, problem solving, working memory, and visuospatial awareness. Beyond that, studying your own game log is a potent form of self-reflection; it keeps you humble, allows you to learn from your mistakes, and helps you better understand the way your own mind works.

At the end of every online Quads tournament, students get score sheets and logs from every game they played, generated automatically by the secure online chess server we use to host tournaments. Each student’s regular Chess at Three tutor also receives a copy so they can delve deeper in their weekly lessons, putting kids on the fast track to chess success.

Every Game is a “Good Game!”

Losing is inevitable; you literally can’t win ‘em all, and this is especially true in tournament chess. It’s also a great thing! If you never lose, you can’t improve, so we make sure our students heartily embrace wins and losses by always saying “Good game!” no matter the outcome. 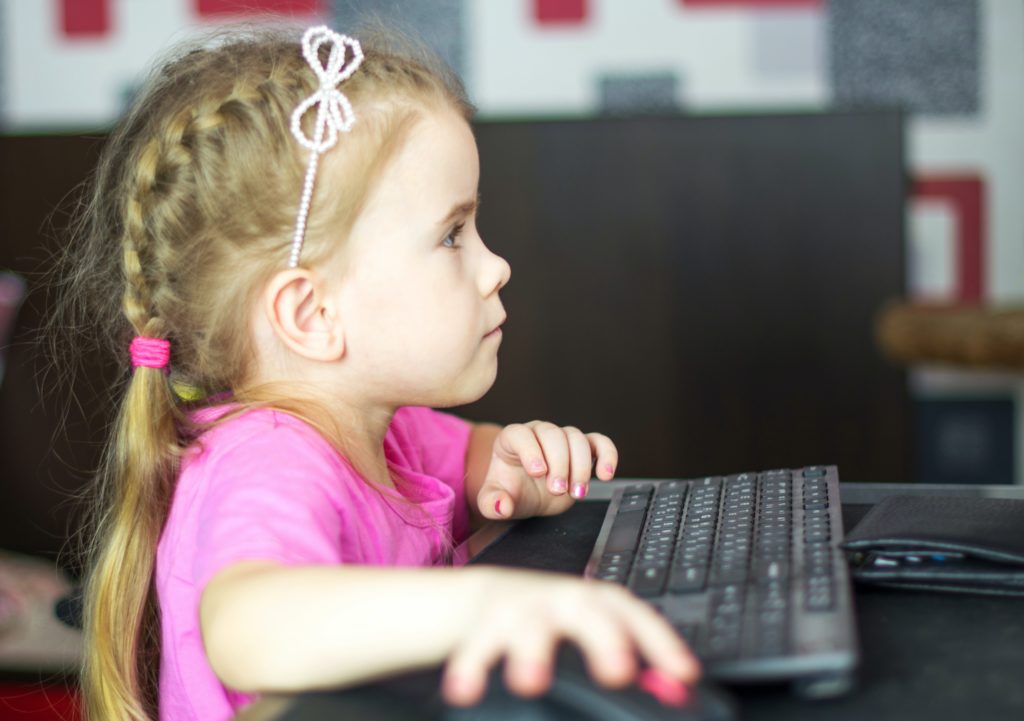 In online Quads tournaments players must forgo the customary handshake after each game, but their sportsmanship doesn’t suffer for it. Quite the opposite, in fact! Here’s what one of our esteemed Quad Captains, Sarah Stevens, had to say about a highly skilled young player who’d grown accustomed to winning every time he played:

At the end of a Quads tournament, we always ask students to share something they’re proud of. After winning his first few tournaments, this young gentleman would often share that he was proud that he’d won, even interrupting other students to announce his triumph. But over the course of several months, I’ve been delighted at the humility and empathy I’ve seen grow in him. During our last tournament, he made a point of giving credit to several other students for their excellent moves, even when one of them captured his queen. He was open and lighthearted about his own mistakes and eager to explore them and correct them in his next game.

Under the supervision of our amazing tutors, students who participate in online and in-person Quads develop ever-healthier relationships with competition, as well as the peers they compete against.

A 2008 study conducted by researchers at UC Irvine determined that elementary-aged students who regularly participated in after school programs scored 20 percentiles higher on math tests compared to students who weren’t members of supervised after school activities. In addition, teachers reported that club participants demonstrated better work habits, task persistence, and prosocial behaviors in the classroom. 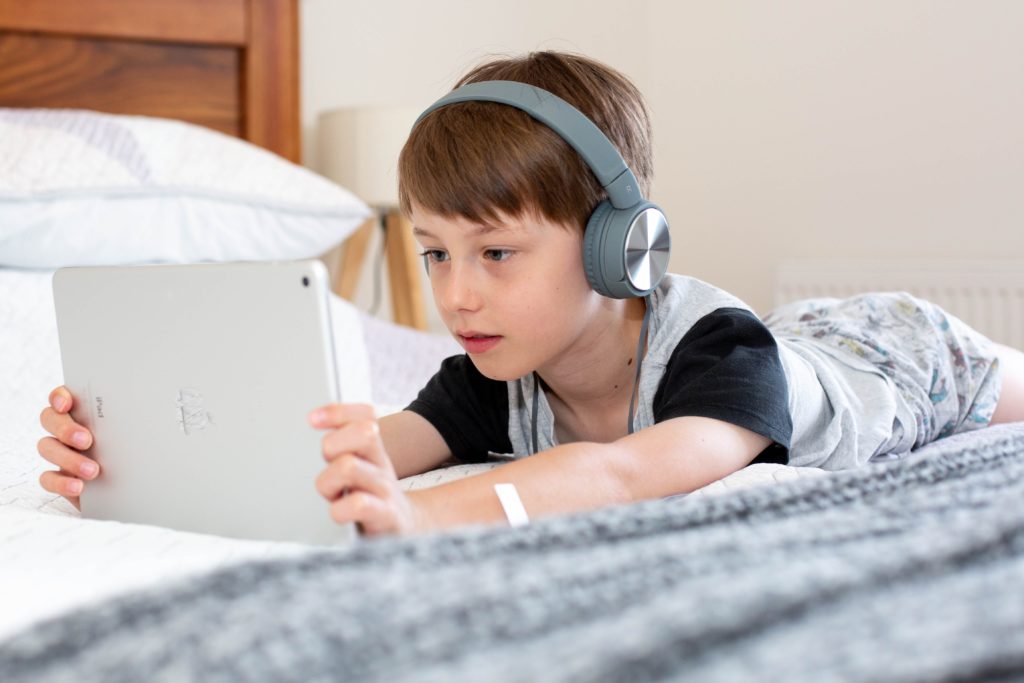 Having taught early childhood students for over 10 years, we at Chess at Three know that chess is an incredible catalyst for friendship and community-building. In-person and online Quads tournaments are prime examples of that, as they pair young players who’ve often never met before.

Combined with the proven academic and social benefits of joining an extracurricular community, Quads will help your child broaden their horizons and grow their social circle, all while having fun.

Chess at Three’s award-winning pedagogy revolves around “ah-ha!” moments; we teach through stories in which students learn new skills right along with characters they know and love. This approach prevents the learning process from becoming prescriptive, and instead allows students to discover each lesson’s core concept in a personal, memorable way.

Nowhere do these “lightbulb” moments shine brighter than in Quads tournaments. When kids realize how to apply what they’ve learned in their regular lessons to a timed tournament game, they attain a much deeper understanding of chess strategy and tactics. These moments of rediscovery make their regular chess lessons even stickier while boosting their confidence in powerful ways. 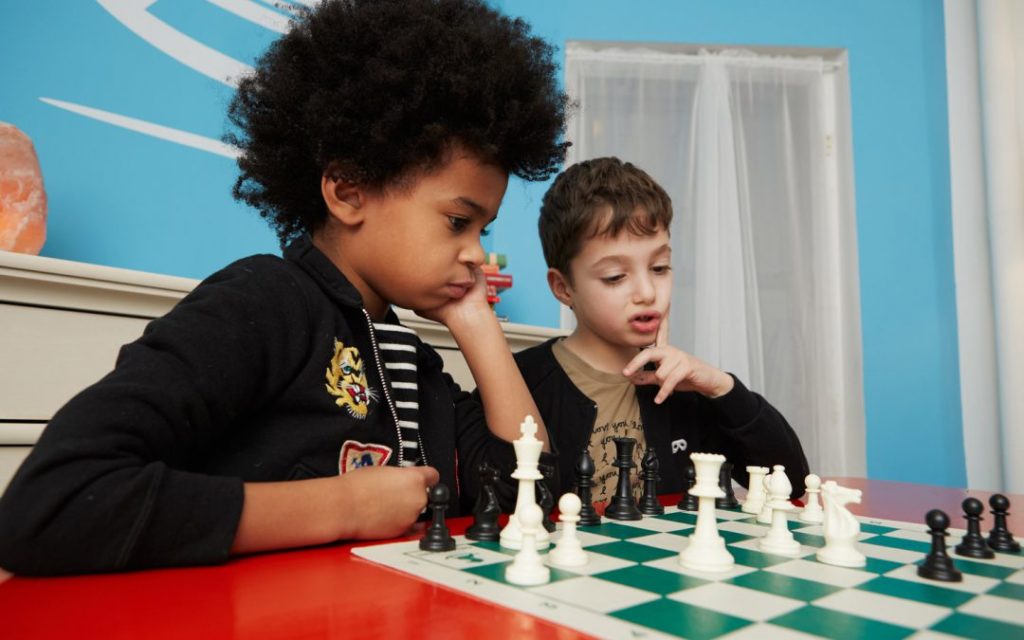 Take it from our Quads Director, Jessica Finney, a veteran chess teacher who had this to say after repeatedly witnessing “ah-ha!” moments during tournament play:

Suddenly they’ll say, “I see a fork!” or “Oh! I better be more careful about danger squares!” Or they’ll successfully complete a checkmate pattern they learned in class. It all clicks for them and they have this wonderful, “ah-ha!” moment. It’s beautiful to see the sense of accomplishment they feel at achieving a personal goal they’ve set for themselves.

Playing in a chess tournament is a unique, rewarding challenge that all young chess players deserve to experience. Our Quads tournaments offer Chess at Three students of every age and experience level the chance to embrace that challenge in a safe, supportive setting.

So don’t wait — registration is open for our December Quads tournaments right now, online and in-person at our Upper East Side Chess Club. We hope to see you there!

Sign up for Chess at Three Lessons and Tournaments Today!
Comments