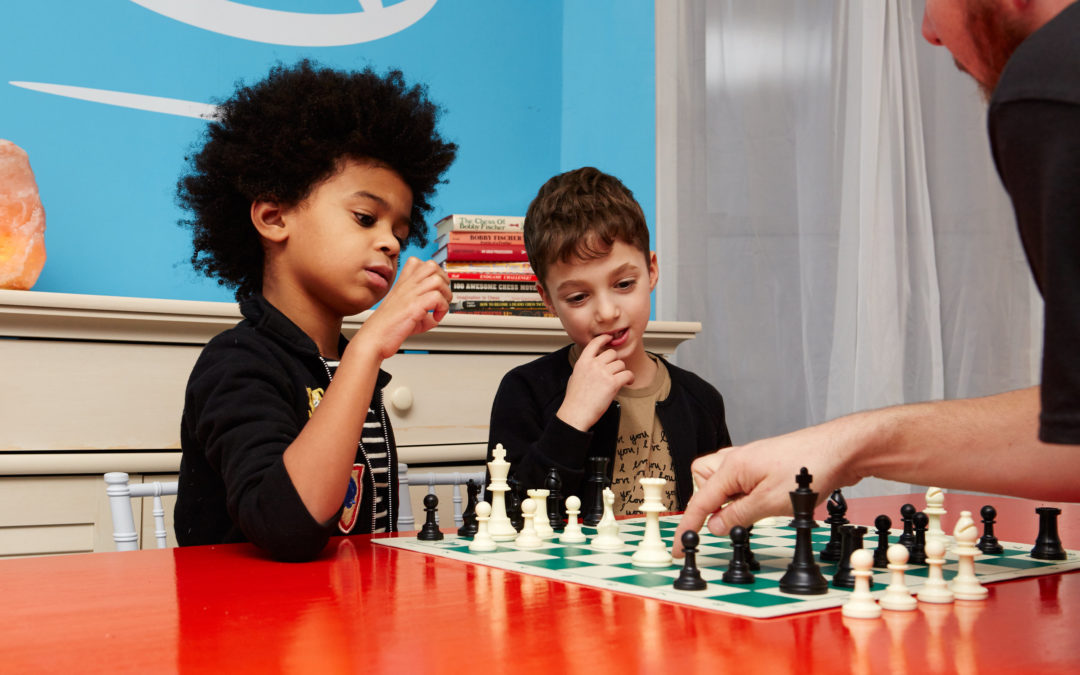 Chess has a great brand; it’s widely thought of as a smart person’s game. But can playing chess actually have a positive impact on children’s test scores?

We want to provide a catalogue of relevant chess studies that have been done over the years. So, at the end of this blog we’ll list all the studies and other collections of studies we’ve come across for your further research.

In this blog, we’ll take a deeper dive into three studies that go above and beyond, not just telling us about the benefits of chess, but why those benefits occur.

Now let’s look at three of these and find out why chess has such positive effects on test scores, then make a plan to help our children maximize their potential!

We’ll begin with a study done by The American Chess School from 1979 to 1983. This is a classic study in which gifted children (IQ greater than 130) were divided into two groups, chess players and non-chess players. The researchers then compared and analyzed each group’s performance on a series of tests.

We’re starting with this study because it shows a strong correlation between chess and higher test scores, while also offering some insight as to why chess has that positive effect.

Here are two tables that show significant differences on critical thinking and creativity test scores between the two groups of students in the study. 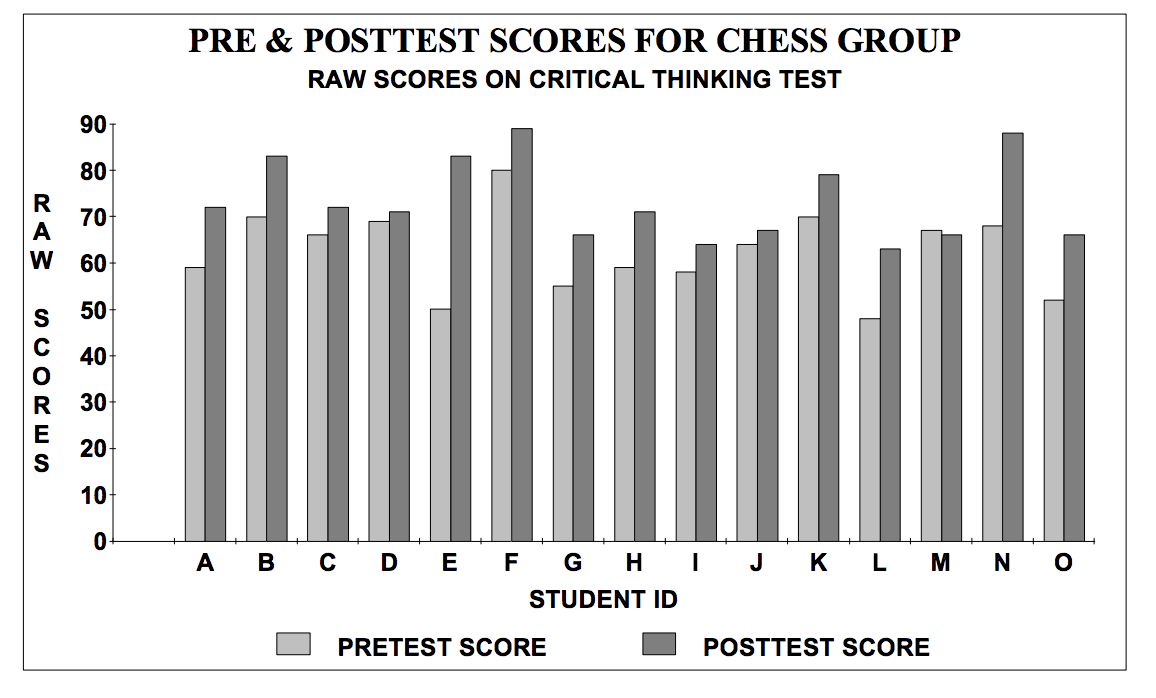 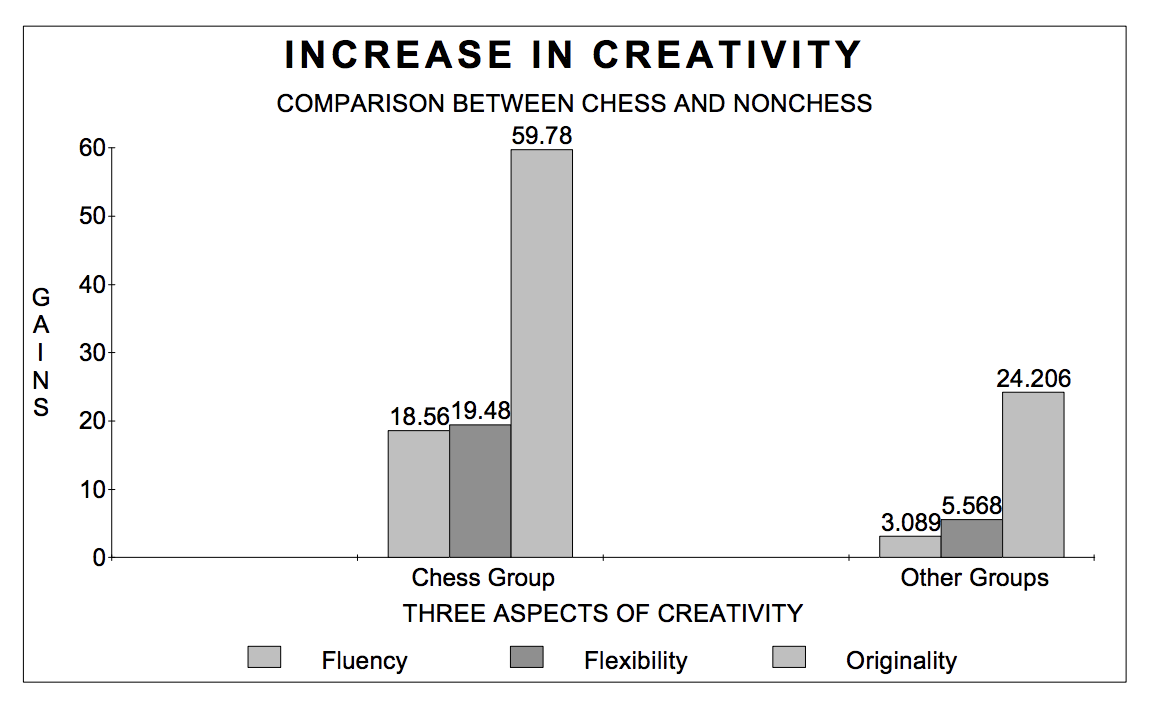 In both of these charts we can clearly see that the chess group scored consistently higher on tests measuring critical thinking, fluency, flexibility, and originality.

Here’s a quote from the report as to why chess has this effect:

“Many teachers use chess as a vehicle to teach critical thinking skills. They stress to students that learning how to think is more important than learning the solution to a specific problem. Through chess, pupils learn how to invent creative solutions to problems. They learn how to analyze a situation by focusing on the important factors.” (Chess in the Schools, 1988, p. 2)

In other words, chess isn’t magic. It’s not a cure-all that automatically increases children’s test scores. Rather, playing chess teaches many children how to think critically and begin to develop a problem-solving methodology.

Our Takeaway
It’s simple: get your child playing chess. The best way to do this is through our private lessons (in-home or online) or by purchasing our award-winning board game, Story Time Chess.

If this study has a flaw it’s the small sample size; only 15 children participated over the course of four years. But don’t worry, the next two tests have bigger sample sizes and give us a more detailed picture of what’s really happening in a child’s head when they play chess.

Test 2- Your move: The effect of chess on mathematics test scores

We’ve included this study, which tracked a group of first- through third-graders in Denmark, because it asked an especially interesting question: What happens when one of a child’s four weekly math lessons is replaced with a chess lesson? Can you boost math test scores by teaching less math and more chess?

Here was the researchers’ conclusion:
“We found that replacing a weekly lecture of traditional mathematics with one based on chess instruction tended to increase subsequent results in math test scores. This is consistent with recent research of the impact of chess playing on mathematical abilities and reasoning and suggests that transfer of abilities and knowledge between the two domains is possible.”

Your move: The effect of chess on mathematics test scores, 2017

But this study also went one step further. The researchers found that chess had a different effect on students who were previously unhappy during math class versus their classmates who had reported being happily engaged during math. Here’s the rest of the conclusion:

“Subgroup analyses revealed that the effect was limited to children who were bored and unhappy while no effect was found for happy children who were not bored. This could indicate an indirect effect of chess instruction on math through reduced boredom and increased happiness. In conclusion, the study demonstrated the potential beneficial effects of chess instructions but further research is warranted.”

Fascinating, isn’t it? The children who were bored or unhappy experienced the biggest improvements after substituting one of their weekly math classes with a chess lesson.

Chess can be a great refuge for those suffering from boredom. This study also suggests that the math tests the students had been taking were too easy and didn’t motivate students to fully engage with the material.

Chess introduced a fun, engaging competition and, by alleviating boredom, gave the children who needed it most a pathway back to academic success.

Make sure your child is challenged! It’s very possible our children are a lot smarter than we know and chess is an excellent, enriching resource for students who struggle to be inspired by traditional education.

Test 3- The Effect of Chess on Standardized Test Score Gains

This study is revealing because the researchers didn’t just compare chess players against their non-chess playing counterparts, they included a third group of students as well. 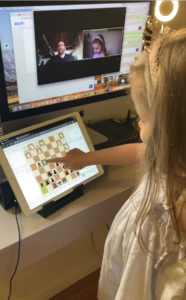 One of our students, Thalia, in an engaging digital lesson with her teacher, Alex!

So what’s the big difference between a five-minute game of chess during lunch and a USCF tournament? Pressure. Tournament chess tests all the skills needed to succeed in the game — concentration, calculation, memory, creativity — and puts them in a pressure cooker.

To perform well in tournament play, a player needs to bring all of those skills to bear over a long period of time. It’s incredibly demanding and draining.

But all that stress can bestow enormous cognitive benefits. One reason the Aspen Elementary study is especially valuable is because it shows the outsized impact tournament chess has on math and reading scores. Here are two charts from the study: 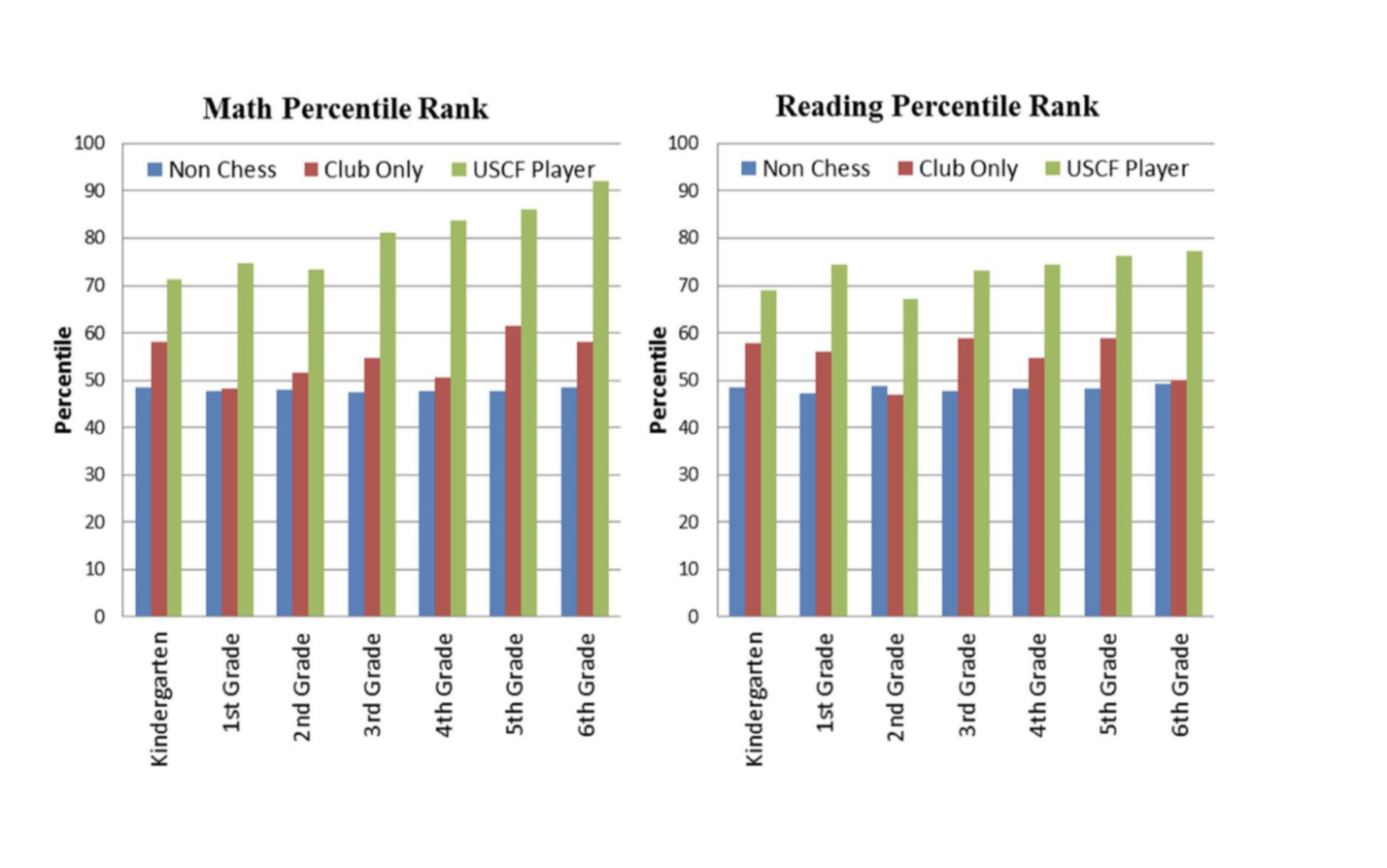 Even a small amount of chess had a positive effect on these students’ reading and math scores. Aspen Elementary’s chess club members performed 5%-10% better in math than their non-chess peers.

But tournament chess appears to have had a massive impact on those participants, to the tune of 30%-50% improvement in math and 10%-20% in reading.

It makes sense; chess tournaments are where a chess player’s skills are strengthened, refined, and tested. Why shouldn’t it have a bigger impact on test scores? 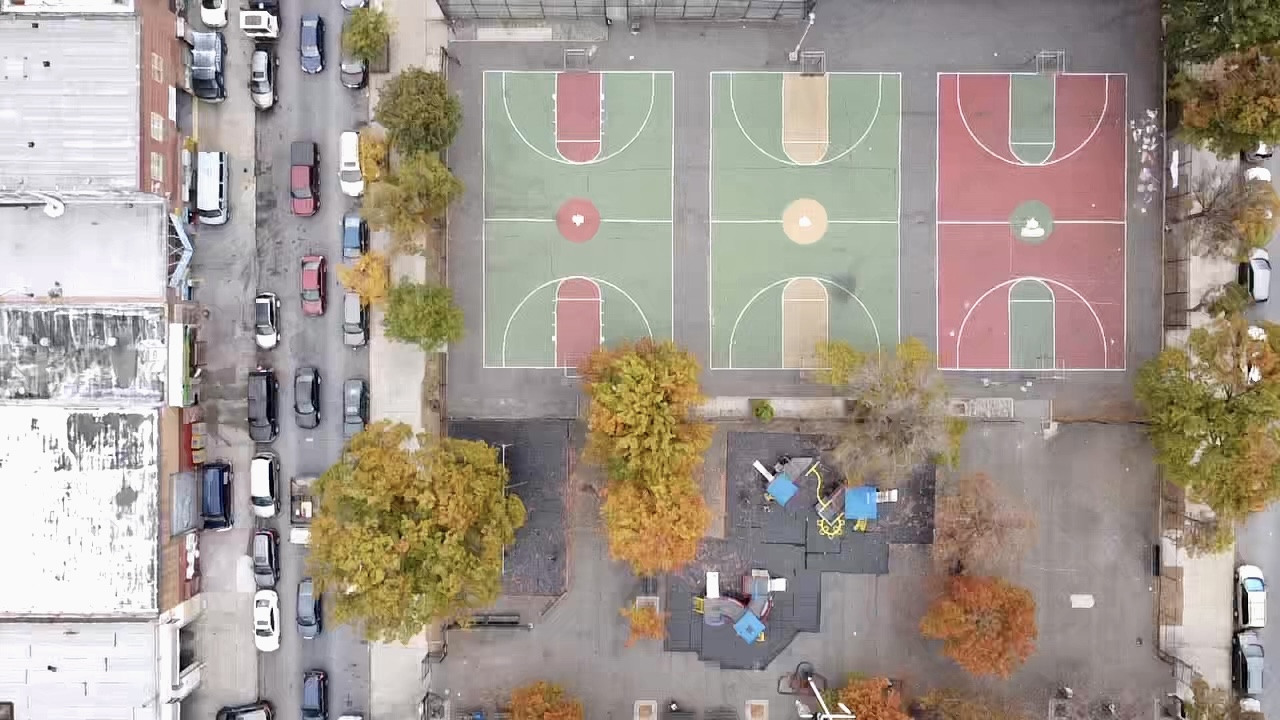 This photo reminds us that chess is a combination of a game and play!

Our Takeaway
Enrolling your children in chess tournaments is the best way to ensure they achieve the absolute top of their potential. The Aspen Elementary study clearly shows that honing chess skills in a tournament setting has a clear, positive impact on test results.

In the time of the pandemic, in-person tournaments are difficult. But have no fear! Chess at Three’s STARS program (Specialized Tutors and Remarkable Students) is perfect for more advanced students who want to focus on improving in chess, with less emphasis on the storytelling side of our approach.

One of our most popular STARS offerings is QUADS. QUADS is a little chess tournament your child can participate in from the comfort of home.

Facilitated by our tutors, QUADS brings STARS students together to play and compete online, safely, and securely. If you’re interested in learning more about STARS and QUADS, click the link below.

Here’s a concise catalogue of chess studies that have been done throughout the years.

A collection of academic papers ranging on topics from chess and the elderly, to video games.

A compilation of studies gathered by the St. Louis Chess club

Another compilation, this time gathered by the US Chess Federation

The Journal of Chess Research