Why We Teach Piece Point Values 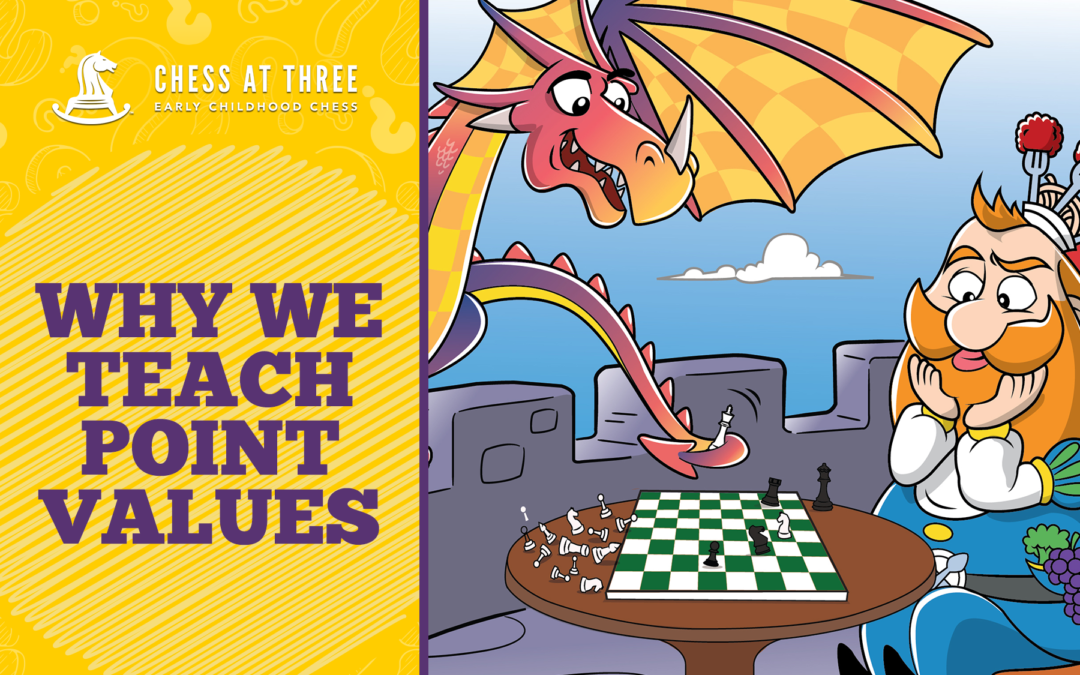 Did you know that every piece on the chessboard has a point value?

If you didn’t, you’re not alone. After all, you won’t see a points tracker at most chess tournaments. But the point values assigned to each chess piece are incredibly instructive for beginners and experts alike.

After Chess at Three students learn how the pieces move, how to make a plan, and how to perform a basic opening, they begin to study tactics used in the middlegame. That’s chess lingo for the middle phase of a chess game in which much of the capturing and jockeying for position takes place. Many of the tactics our tutors introduce are tied directly to piece point values, which is why we devote several weeks to a module called “The Spaghetti Tug o’ War.”

These lessons teach even the youngest students the official point value of each chess piece. Learning and internalizing the points system provides a powerful decision making framework which allows kids to improve their tactical thinking and chess gameplay. Here’s how it all breaks down.

Who’s Got the Power?

There’s an undeniable hierarchy on the chessboard—some chess pieces are simply stronger than others. Kids usually intuit those strength differences as they internalize the basic movement rules, but learning the exact point value of each piece helps children make greater sense of the power dynamics already present within the game. 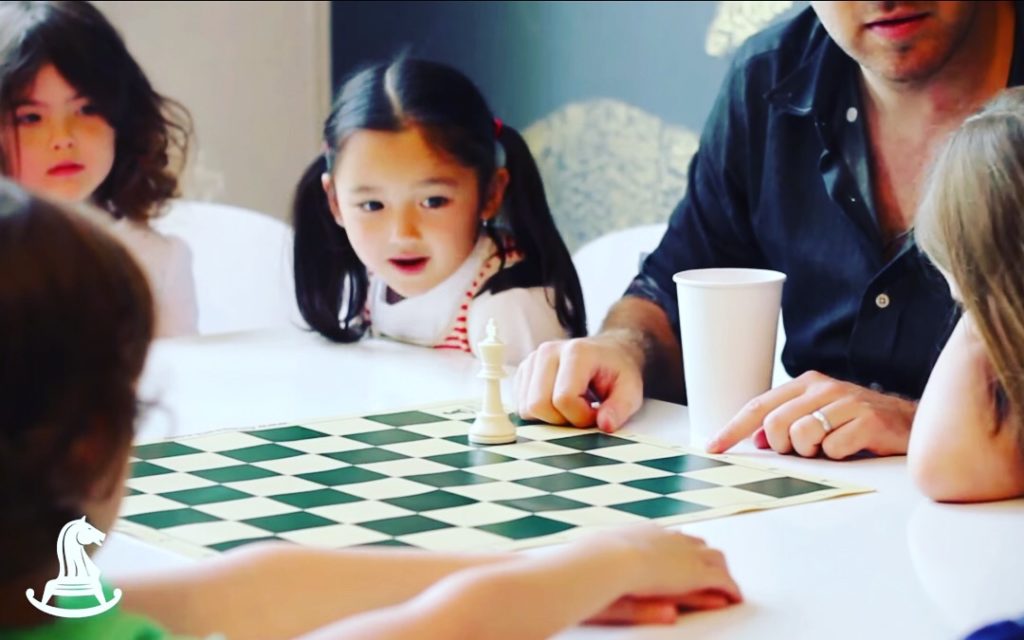 For example, after their first ten Chess at Three lessons, most students implicitly understand that a queen is far stronger and more mobile than a knight. Introducing point values allows kids to quantify that strength difference in a concrete way, building their confidence and improving their gameplay.

In the our point values module, those strength differences are revealed in hilarious games of tug o’ war. Chef Squishyfeet has been conducting kooky culinary experiments, creating gigantic versions of spaghetti, french fries, pickles, and more, which the characters use in place of rope for their tugs o’ war.

Through captivating stories, practice-oriented mini-games, and personal attention from tutors, these lessons provide a fun context in which kids can absorb this crucial aspect of chess’s rule set.

Navigating the middlegame can be tricky. Our “Secret Missions” lessons provide a solid foundation for how to start a chess game, but as any experienced chess player will tell you, a strong opening can only take you so far. 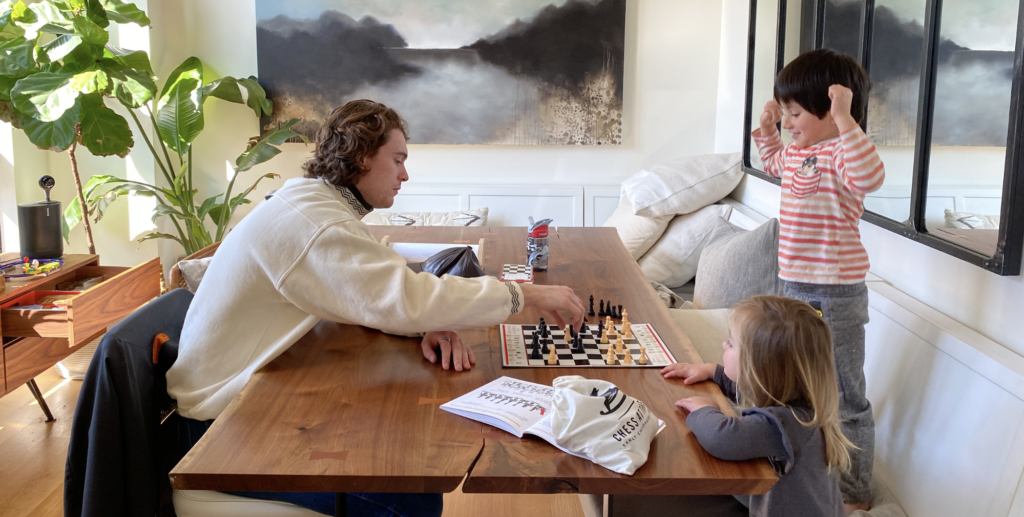 As players move into the middlegame, they’ll face difficult decisions about which pieces to commit to the fray and when. Should a queen be sacrificed as readily as a pawn? Almost never! But without knowledge of the pieces’ point values, kids may not have an immediate answer to that question. Knowing the point values teaches our students to preserve their strongest pieces in the short term so they can achieve their long-term goal of capturing the king.

Point values also help chess players make other types of critical in-game decisions, like choosing between two available captures. For instance, knowing that a rook is worth more points than a bishop helps kids choose the best move with confidence, while deepening their understanding of the complex inner workings of the game.

Whole child development is central to our mission, and learning the chess piece point values offers a massive boost to your child’s quantitative reasoning. For decades, researchers have shown that early childhood students who routinely apply arithmetic skills outside the classroom have a much easier time bringing those skills to bear in an academic setting and adapting their math knowledge to solve novel problems as their schooling progresses. 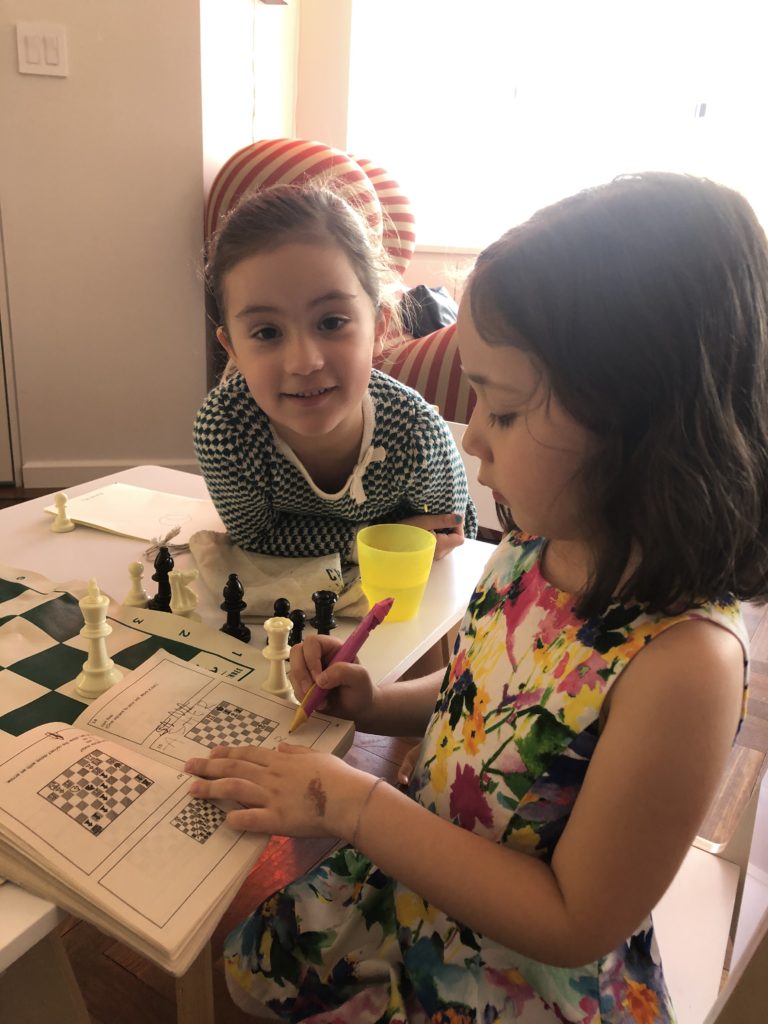 Every point value lesson in our “Spaghetti Tug o’ War” module includes mini-games that involve adding up each team’s total points to determine who’s ahead, giving kids a chance to practice those all-important arithmetic skills while having fun playing their favorite game!

But that’s not all. Our point value lessons go beyond basic addition and subtraction by subtly incorporating a foundational introduction to multiplication. That’s because Chess at Three’s curriculum frames the strength differential between the pieces in terms of “pawn-power points.”

The pawns, individually the “weakest” pieces on the board, each have a point value of one. By contrast, knights have a value of three points each. Our system helps kids understand that a knight is as strong as three pawns put together, priming them for elementary-level instruction in multiplication and division.

Learning about chess piece point values is an exciting step in any player’s chess journey and we can’t wait to take that step with you! If you haven’t already, prep your youngster for success by registering for in-person or online lessons. Head to chessat3.com and reach out to our concierge team today!