King of the Kitchen – Free Chess Story and Mini Game

Summer vacation was in full swing and, with the pawns on break from school, King Chomper, Queen Bella, King Shaky, and Queen Allegra decided to take their families down to the Endless Sea for a day at the beach!

The pawns, bishops, and knights all had lots of toys they wanted to take to the beach, so the kings and queens called their rooks over to help. The rooks were big, moving towers that could hold all the swimmies, goggles, and towels they would need. Rushing out the door, the kings and queens packed the rooks in a hurry and rode the magical towers down to the shore.

When they got there, the pawns raced to the cool, clear water and dove in. Bea and Bop zigzagged across the waves on green and white surfboards, and Clip and Clop danced around in the shallows.

“This is the life!” King Shaky said as he eased into a beach chair made of pillows.

“Not a care in the world,” Queen Allegra replied, doodling happily on her sketchpad.

King Chomper and Queen Bella smiled and kicked up their feet as they watched their kids have a blast under the summer sun.

But swimming, splashing, and building sandcastles can make a person hungry, and it wasn’t long before Graham and DJ, two pawns from Team Shaky, ran up and tugged on Queen Allegra’s cape.

“Mom, Mom!” they shouted. “We’re hungry! Can we have a snack pleeeease?”

“Sure,” said Queen Allegra, “there are plenty of snacks in the rooks.”

Graham and DJ scrambled over to the rooks, but when DJ peeked inside, she let out a horrified shriek. “AGHH!” she screamed. “We forgot the food!”

Sure enough, in their hurry to leave the castle, King Shaky and Queen Allegra forgot to pack food. Just then, King Chomper jumped up.

“Fear not!” he cried, walking over to his own rooks. “If there’s one thing I never forget it’s—NOOOO!!! We forgot to bring food, too!”

The pawns’ bellies were grumbling loudly now, and King Shaky began to worry that everyone was about to throw a cranky, hangry tantrum. Luckily, he had an idea.

“Don’t panic!” he said. “We just need to pop back to the castle and get some food from the kitchen. King Chomper, you and I should go so everyone else can keep having fun.”

“Sounds like a plan!” King Chomper said. “Hey, let’s make it interesting and have a little race. First one to the kitchen is the winner!”

King Shaky agreed and the two kings hustled over the sand dunes, across Chesslandia, and back to their castles. But which one reached their kitchen first? Play a game of “King of the Kitchen” to find out!

How to Play “King of the Kitchen”

This chess variant is commonly known as “King of the Hill,” though we’ve modified the name to include our term for the four squares in the center of the board: the Kitchen. 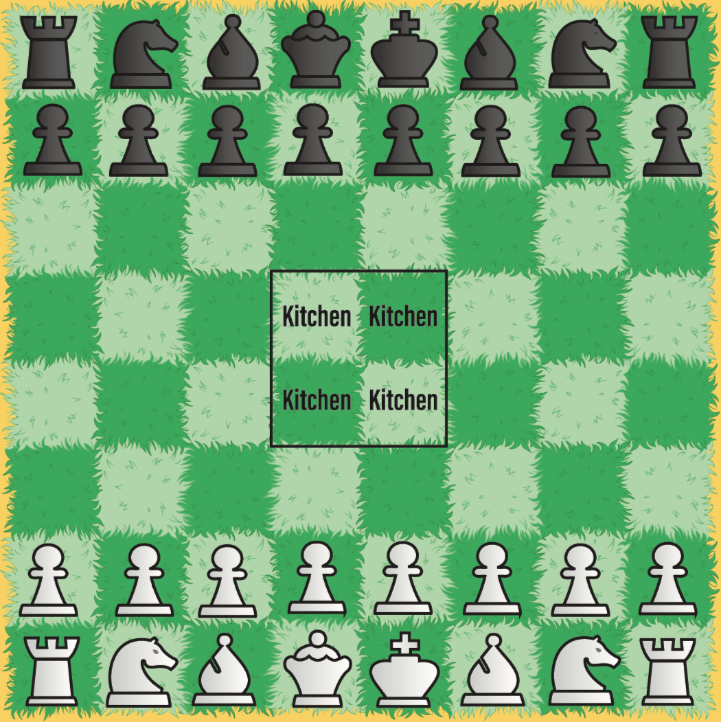