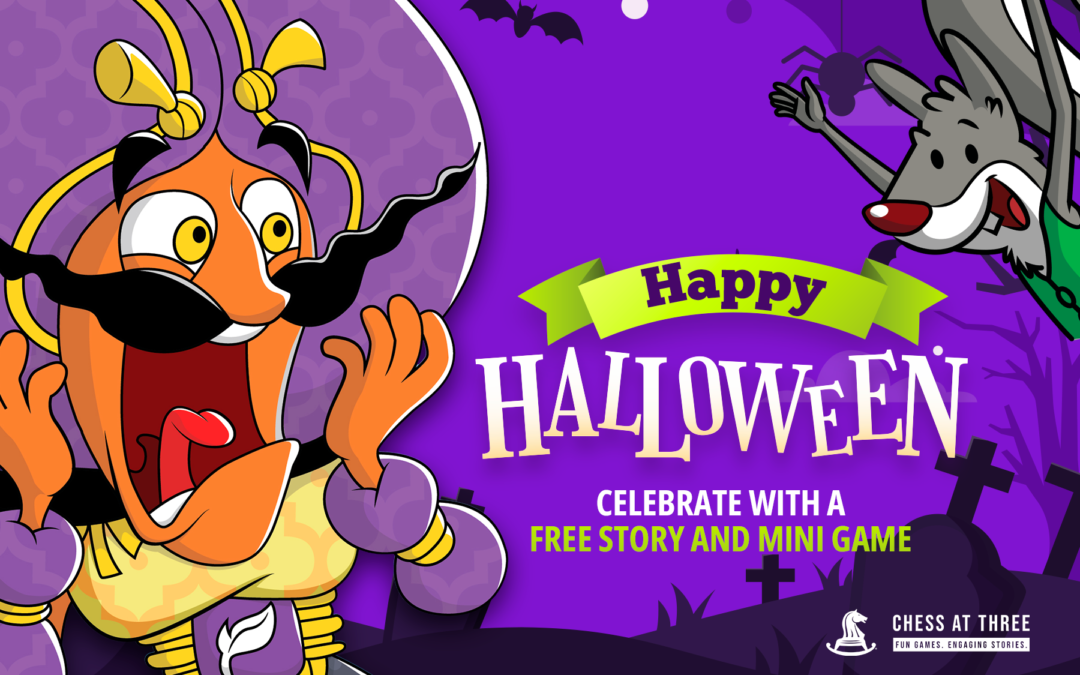 It was Halloween night in Chesslandia and Clip and Clop were getting ready to go trick-or-treating with the pawns! They put the finishing touches on their dinosaur costumes and galloped outside.

“I hope we get treats!” Clip neighed. “Especially my favorite: candy corn!”

“What if we get tricked?” Clop asked. “We’ve never done this before!”

Just then, all of King Shaky and King Chomper’s pawns raced out of their castles, decked out in fanciful costumes.

When they arrived in town, jack-o’-lanterns adorned every doorstep and happy kids ran from house to house collecting candy. The knights followed the pawns to their first house of the evening and DJ the Pawn, who was dressed as a rock star, rang the doorbell.

“Trick or treat!” DJ shouted and the door creaked open…

“BOO!!!” Pat the Postwoman burst out in a ghost costume with a mailbag full of chocolates. The pawns all giggled and grabbed some candy.

But Clip and Clop didn’t hear her; they were frightened to bits and galloping like the wind. They ran clear past the edge of town and into a moonlit forest.

“No kidding,” Clip agreed. “I just hope the pawns are okay. Wait…Where are we!?”

The knights looked around and realized they’d made a big mistake. They were lost in a dark forest! On Halloween! Just before panic set in, Clop noticed a light through the trees.

A moment later, the knights found themselves in a clearing lit by a flickering lantern. On the ground was a life-sized chessboard. Suddenly, a shadow began to creep toward them. The knights started to get worried again but relaxed when they saw who it was: Earl the Squirrel wearing a Robin Hood costume!

“Hi, Earl,” Clop replied, “can you help us get back to town? We got scared and lost our trick-or-treating buddies.”

“Of course!” Earl said. “But not until you’ve completed my Halloween Chess Challenge!”

Earl scampered up a nearby tree. Suddenly, gigantic candy corns tumbled down onto the life-sized chessboard below, each one landing on its own square.

“Your task is simple!” Earl continued. “Start in the corner and capture as many candies as you can. Take only what you capture! When you run out of captures, the challenge is over and I’ll point you back to town. One-two-three GO!”

Clip and Clop went gallop, gallop, step to the side, gobbling as much candy corn as they could and stuffing the rest into their saddlebags. Before long, both knights found themselves on squares where they couldn’t make another capture.

“Great capturing!” Earl exclaimed. “The town square is just past those trees. Have fun with the pawns!”

The knights thanked Earl and galloped away. When they met up with the pawns a few minutes later, they told them what happened.

“You two are so silly!” Ava the Pawn said through a mouthful of licorice.

Clip and Clop dumped all the extra candy corn out of their saddlebags to share with pawns. Everyone had a happy, safe Halloween. Earl’s Halloween Chess Challenge was so much fun that when they got home, they all recreated it on their chessboards!

How to Play Earl the Squirrel’s Halloween Chess Challenge:

For an extra challenge: