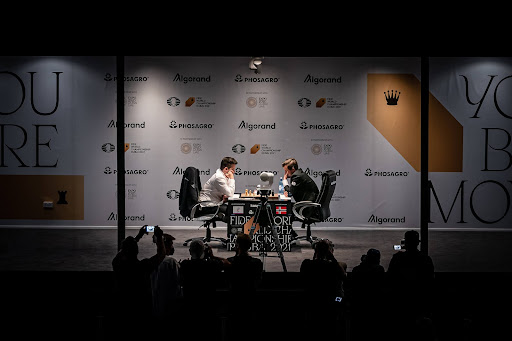 In early December of 2021, reigning World Champion Magnus Carlsen of Norway faced off against his Russian challenger, Ian Nepomniachtchi (aka “Nepo”), in a three-week match that would determine the next World Chess Champion.

From the outset, Nepomniachtchi, a grandmaster since 2007, faced daunting odds against Carlsen, the highest-ranked chess player in history and the winner of the previous four World Championships going back to 2013. But no one could have predicted the drama that unfolded in Dubai this year.

At Chess at Three, we love when our students take an interest in chess current events, so here are three moments from this historic match that you can review with your little chess players!

1. Did Nepomniachtchi move too quickly in Game Two?

After the first bout ended in a draw, Game Two gave Carlsen his first opportunity to play as White, a slight natural advantage, especially between grandmasters.

Here’s what the board looked like before Nepo’s (black pieces) 24th move. If you’re familiar with piece point values, take a second to count up each player’s points to see who’s winning. 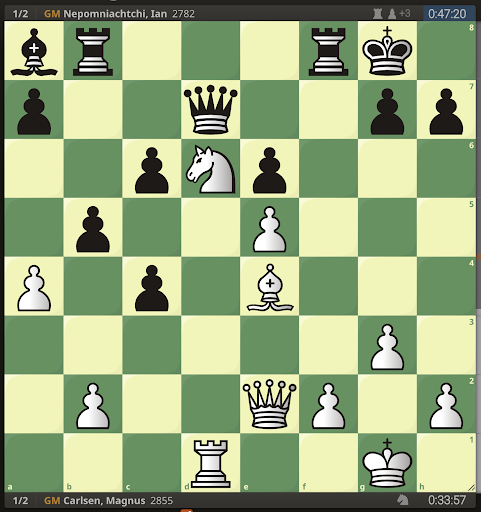 The answer is Black! Nepo, with the black pieces, is up by three points at this moment, 29 to 26. He got there by taking one of Carlsen’s pawns and winning an exchange in which he traded a knight for a rook.

Now comes the fun part! If you were Nepo, what move would you make for the black team? 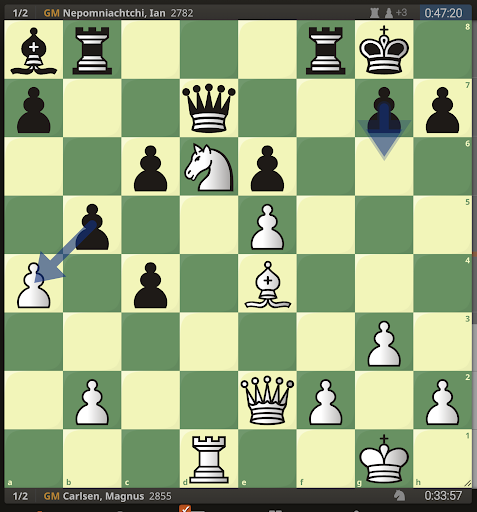 Two of Black’s strongest possible moves are g6 or bxa4.

But Nepo didn’t make either one, and instead quickly played a pawn to c3. 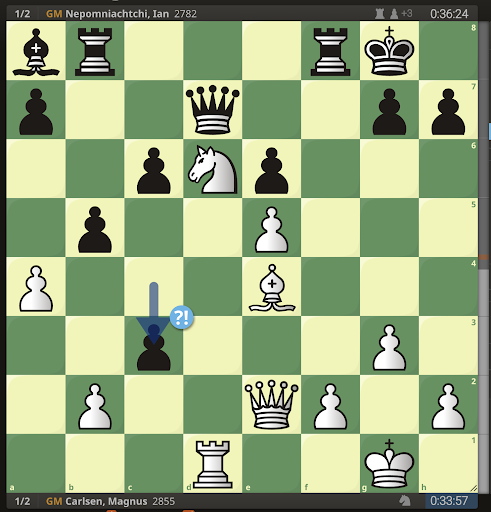 With that, Nepo’s advantage began to slip away and the game ultimately ended in a draw. Many chess fans wonder what might have happened if he had just thought a bit more before making that move. He might have found a better option that could have led to a win, rather than a tie. The lesson? Always think before you move!

2. The Longest Game in WCC History

It’s not uncommon for grandmasters to draw, especially at the World Championship, and this year’s match seemed to follow that trend at first. Games One through Five all ended as ties, with each player earning half a point. In fact, every classical game from the previous World Championship in 2018 was a draw, and no player had actually won a classical game outright in the WCC since 2016.

So, the chess world was waiting eagerly for someone to win one and this year we got what we wanted. Game Six of 2021’s match will go down as one of the most epic in World Chess Championship history.

Early on in Game Six, Carlsen (white pieces) traded his queen for two rooks, giving the game an unbalanced feel in Nepo’s favor, though the points remained even. 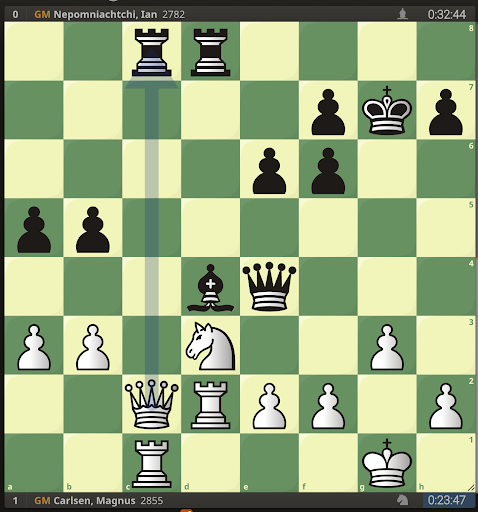 Later, Nepo made an unusual move by not capturing Carlsen’s b4 pawn. Once again, he let his potential advantage (having a queen when Carlsen didn’t) slip away. 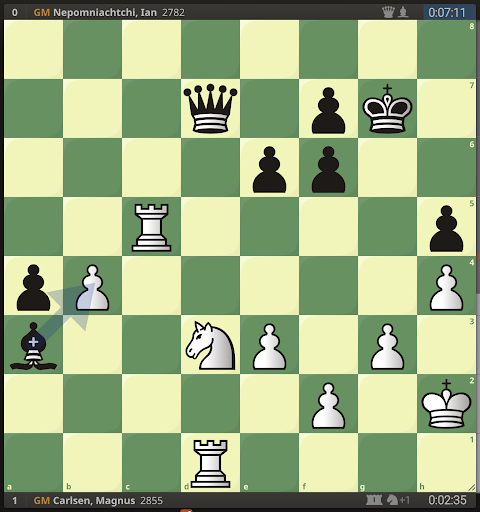 The game ground on for a record-breaking seven hours and 47 minutes, the longest game in WCC history. As the time on Nepo’s clock began to dwindle, so did the strength of his play. 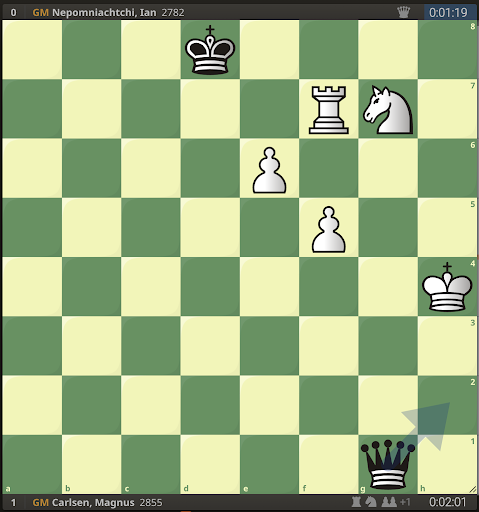 Nepo resigned when it became clear that Carlsen’s white king could simply march across the board where he’d be safe from the black queen’s checks. Notice how well all of White’s pieces protect each other. The e6 pawn is protecting the rook, which in turn protects the knight and the f5 pawn. Carlsen’s pieces are working in perfect harmony, something every chess player strives for.

At the end of it all, this World Championship match will not be remembered as one that Carlsen won, but one that Nepo lost. After the marathon that was Game Six, Nepo seemed worn down and tired. He made critical errors in Games Eight, Nine, and Ten that cost him big and gave Carlsen an insurmountable lead in the overall scoring.

Here’s a position from Game Nine. Nepo, playing as White, just made a big mistake by moving his pawn to c5. The double question marks on the diagram mean: “Why did he do that!?” 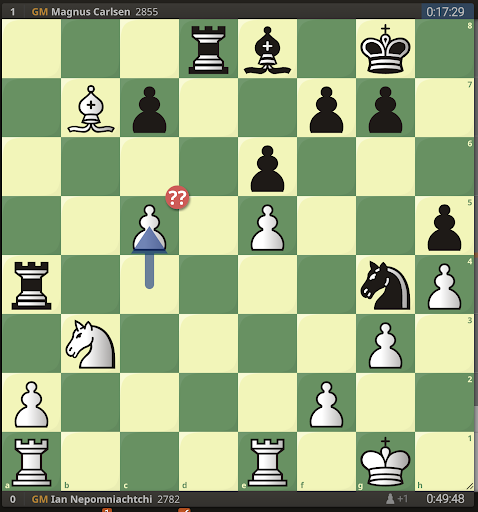 Carlsen, playing as Black, couldn’t believe it. His opponent’s blunder gave him a chance to seal the win. Want to know how he did it?

Just for fun, see if you can find the strongest move for Carlsen’s black pieces. (Hint: Trap the white bishop!) 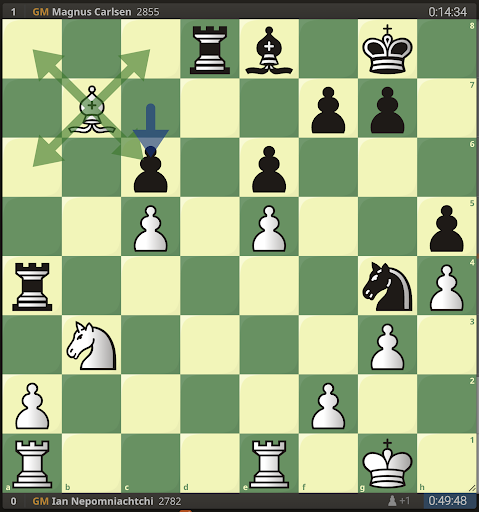 The answer is c6! Carlsen pushed his black pawn forward to c6, leaving Nepo’s bishop without a safe square to run to. Without that bishop, Nepo knew he wouldn’t have a snowball’s chance in Aruba to fight his way back, and Carlsen won the game by resignation.

The teachable moment here: Don’t be discouraged when you goof. Even grandmasters make mistakes!

For the time being at least, Magnus Carlsen reigns supreme, but as any defending champ will tell you, there’s always a giant killer waiting in the wings. So who’s it going to be? Maybe a Chess at Three student?