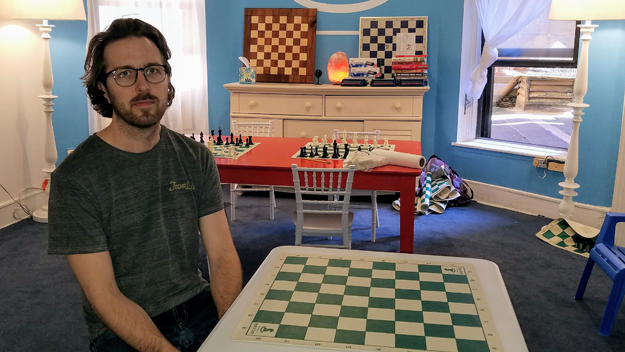 Tyler Schwartz was more than 3 years old when it started for him.

“I started playing in college because I was going to study with someone from the Lincoln Center Jazz Orchestra, and someone told me that all the guys in the Lincoln Center Jazz Orchestra love chess,” he told WCBS 880’s Alex Silverman one afternoon recently as they sat in toddler-sized chairs on opposite sides of an adult chess board. “So I figured I’d learn the game so if it came up, I could at least talk about it.”

Schwartz found a chess club in the Village and within a few years was playing in competitive tournaments at night. As his passion for the game grew, one day came a call asking if he’d be interested in teaching chess to preschoolers.

He figured Google might give him some insight into how to help children so young comprehend such a heady game.

“But there was just nothing out there,” he told Silverman.

On his first day, Schwartz had seven classes in a row.

“I went into the first class and I said, ‘hey everyone, this is the king, he moves one square at a time,’ and the kids all asked, ‘Why?’ So I said, ‘it’s kind of just one of the rules,’” he said.

You can imagine the blank stares.

By the seventh class, Schwartz was beginning to get frustrated.

The lightbulb came on.

“I said, ‘he had pancakes for breakfast, 10 pancakes.’ And I asked the children, ‘If you had a belly that big, would you walk fast or slow?’” he said.

When Schwartz put the king on the board and asked the kids how he should move, the answer was, remarkably, a single space at a time.

When the complex, thinking-person’s game of chess becomes as simple as story time, Schwartz said there’s no need to be a grand master to teach it. Some of Chess At Three’s 50 instructors are actors and stand-up comedians.

“The environment is so creative,” said Rebekah Melocik, who’s a musical theater lyricist when she’s not teaching at the club on Madison Avenue. “They encourage you to really make every lesson your own.”

“They’re kind of unknowingly going into this mental gym,” said Schwartz. “They just think it’s fun, it’s silly. They we play this game and they don’t know they’re doing these really difficult calculations and predictions.”

Now that he’s licensing his curriculum to preschools around the country, Schwartz and Chess At Three reach as many as 14,000 children a week.

“You really get to connect one-on-one,” said Melocik, as she prepared to teach three boisterous boys, Max, Ben and Charlie, an afternoon lesson. “I feel like of any job I’ve had in my adult life, this one you really have to show up for, you can’t phone it in.”

And it’s easy to see how they learn about far more than just chess.

“If a 4-year-old really loves chess and he loses a game, he’s going to be really upset,” said Schwartz. “Trying to get that child to shake hands and say, ‘good game,’ is the most difficult thing we can do. So we have a five-week story about how it’s important to shake hands even after you lose and even if you feel rotten.” 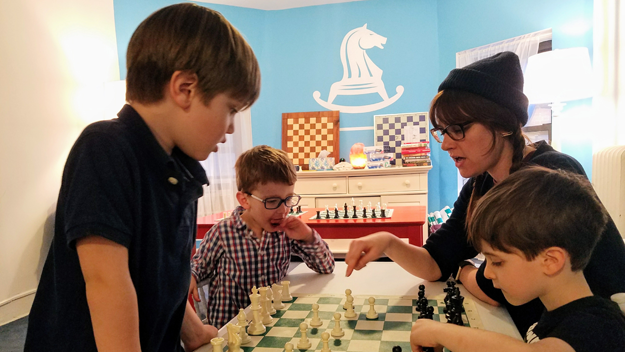